If you’re the kind of person who still enjoys reading on paper rather than on screen, the next book you read might be printed with algae. Living Ink, a Colorado-based company, has just secured funding from Colorado’s Advanced Industries Accelerator (AIA), bringing the dream of a sustainable ink closer to completion. The company develops algae-based ink, aiming to create a sustainable, renewable, biodegradable and safe ink replacement.

Regular ink carries a considerable amount of heavy metals, such as cadmium, copper, chromium, iron, lead, and aluminum. Black ink in particular, is mainly composed of tar and other petroleum derivatives. Petroleum oil is also widely used as a carrier for ink, and other volatile organic compounds are added on top of it as regular solvents. This is what led Living Ink to develop a new kind of ink, powered by nature.

And just to make it cooler, not only can their tech replace regular, petroleum-based ink, it can also be used in more creative ways, such as by creating time-lapse ink.  This ink allows artists and enthusiasts to create pieces that evolve over time, as the ink grows when exposed to light. This product was originally published on Kickstarter in November 2015, and continues fulfilling the company’s objective of making science fun and more accessible to everyone. Even though the campaign is closed, you can currently order thank you cards printed in 100% algae ink from the company’s website.

This first product and the successful Kickstarter campaign were part of the company’s strategy to transform an interesting discovery into a mid-way product that could further fund and support their research and development process. Their campaign lays down their interesting story: “While researching and developing our sustainable algae ink to replace the regular ink we use everyday something unexpected happened—the ink changed from one day to the next. As scientists, we began analyzing the “problem.” It didn’t take long for us to realize that this “Living Ink” was really cool. […] We are here on Kickstarter because it’s a creative community that supports art and science. Until this point, we’ve been deep in the science (something to the tune of 10 years studying and researching algae). But, our goal has always been to see something useful result from all of that research.”

The gamble paid off, and the company continued their development. In February this year, Living Ink announced an agreement for the joint development and commercialization of inks containing renewable algae biomass developed by Cellana, a leading company in the development of algae-based products. According to the agreement, Cellana would supply Living Ink with whole algae biomass to formulate inks and bring them to market.

The company’s latest good news, the always-needed funding, comes as part of the Colorado Economic Development Commission’s AIA grants for Colorado companies with high impact technologies.  The company was awarded $74,000 to continue the development of their products. “Colorado is a national leader in innovation and business startups,” stated Office of Economic Development and International Trade executive director Stephanie Copeland through the press release outlining the latest awardees. “The Advanced Industries Accelerator program is a key initiative in encouraging such activity within the State and we are thrilled to fund so many innovative organizations.”

Living Ink continues developing their ink and expanding their color palette, and has created black printer ink as well as a blue, orange and other variations one wouldn’t initially expect from microalgae. Books may still be a bit far away, but the possibilities for amazing evolving art work and beautifully colored design pieces seem infinite even now. 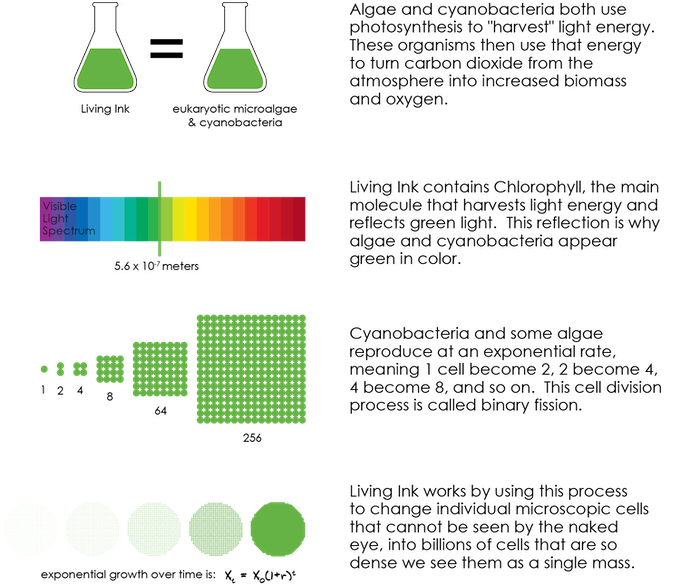 Best described as an entrepreneur, writer and speaker, Emilia is a young Chilean innovator working in the intersection of science and social impact, hoping to make the world a better place through biotechnology. At 22 she founded Kaitek Labs, one of Chile’s most renowned synthetic biology startups, for which she won numerous prizes, raised public and private capital, and attended business programs in Europe, Asia and Silicon Valley. After 4 years of writing about global biotech in various outlets and seeing the lack of Latin representation in the global scope, she also founded Allbiotech: the first Latin American Biotech network for biotech. She seeks to grow the local ecosystem through scicomm and innovation.

View all posts
Click here to join our weekly newsletter. We want to hear what you think about this article. Got a tip for our news team? Write to editorial@synbiobeta.com.

DMC and Conagen Partner for Commercial Manufacturing of L-alanine

Next on the Menu: Cellular Agriculture Could “Domesticate” Any Animal on the Planet

The DNA Industry Is Going Cell-Free

Who Owns CRISPR in 2021? It’s Even More Complicated Than You Think

Living Power: This Bio-Battery Is Harnessing the Power of DNA

Could Algae Help Solve India’s Pollution Crisis? Why Some Scientists Aren’t Giving Up

Meet the Heroes You Never Knew You Had

How Will the Proteins of the Future Be Designed?

Pharmaceutical Manufacturing Just Got An Automation Boost From IoT

America, Your Diet Is Killing You: Why The Glucose Crisis Will Be Worse Than The Opioid Crisis

What Can Synthetic Biology Do Better to Help End Hunger?

SynBioBeta State of the Industry Town Hall with Drew Endy

SynBioBeta State of the Industry Town Hall with James Collins

SynBioBeta State of the Industry Town Hall with George Church